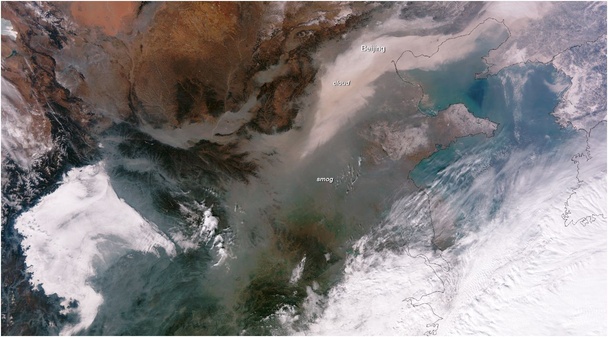 Even from the remote reaches of space, you can almost feel your bronchial trees heaving and dying when looking at this view of China's enduring air pollution. Taken on Sunday by the Suomi NPP satellite, the image above shows a titanic cloak of smog that has settled over the country, turning streetscapes into ghostly gray-outs of choking particulate matter.

Pollution from cars and coal plants are simply not going anywhere, thanks to windless cold weather that's slammed an atmospheric lid onto eastern China. The result has been escalating levels of teeny particles in the air that can infiltrate human airways and even the blood supply with disastrous results for health.

How bad is it? The U.S. considers air with miniscule particles above 100 micrograms per cubic meter as "unsafe." This weekend, the U.S. Embassy in Beijing logged concentrations almost as high as 900 micrograms. As many as 33 cities had "hazardous" air during the weekend, according to Chinese media, leading to crushes of people seeking medical help for breathing problems and a booming market for face masks.

Chinese officials' response to the air-pollution crisis has been quick and decisive. Stay indoors! they say. Dozens of construction sites have shut down to help diminish the foul cloud. So far, the situation has not approached the direness of the weather-related smogmageddon of October 2010. An ocean of cottony air reduced visibility to as little as 330 feet in places, leading to a rash of traffic accidents that wound up killing at least 32 people. (See a satellite image of those conditions here.)

On Monday, Reuters photog Jason Lee traveled through Beijing snapping shots of the congee-like fog sloshing over the roads. Here are some of the lugubrious scenes he witnessed, beginning with Beijing's central business district (FYI, he's not shooting in black and white):