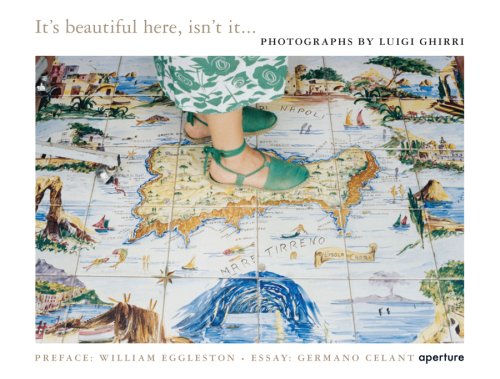 Luigi Ghirri (born in Scandiano, Italy, 1943–1992) studied and worked in Modena. He exhibited throughout Europe, with solo shows in Geneva, Amsterdam, Arles, and Cologne, as well as at the Light Gallery, New York. His work is in numerous collections, including the Museum of Modern Art, New York; Stedelijk Museum, Amsterdam; Bibliothèque Natio­nale de France, Paris; and Canadian Centre for Archi­tecture, Mon­treal. His work is represented by Julie Saul Gallery, New York.

It was the first American publication of the work of Luigi Ghirri, who at the time was little known in the U.S., and highlights the photographer’s preoccupation with spatial relationships and color photography, and his engagement with concepts that would come to define the New Color and Topographic movements and influence such photo titans as William Eggleston and Martin Parr.
[ via http://www.newyorker.com/online/blogs/photobooth#ixzz1nvwIIfPn ]
《Its Beautiful Here Isn It…》在那时候的美国是知之甚少，但这本书强调了摄影家对于空间与彩色摄影关系的专注，在此书中柳基·西里定义了新色彩、新地形，并影响了William Eggleston和Martin Parr。
本书内容简介：
Luigi Ghirri was an extraordinary photographer, as well as a writer and curator whose career was so rich and varied that it seems like a lesson in the contemporary history of the medium. Although well known in his native Italy, Ghirri does not yet have the international audience his work merits–perhaps because he died so young. It s Beautiful Here, Isn t It…–the first book published on Ghirri in the U.S.–will establish him as the seminal artist he was. Uncannily prescient, Ghirri shared the sensibility of what became known in the U.S. as the New Color and the New Topographics movements before they had even been named. Like his counterparts in Italian cinema, Ghirri believed that the local and the universal were inseparable and that life s polarities–love and hate, present and past–were equally compelling. Not surprisingly, his interests encompassed all the arts: he worked in Giorgio Morandi s studio and with architect Aldo Rossi, while influencing a generation of photographers, including Olivo Barbieri and Martin Parr. This dynamic new book includes a selection of Ghirri s essays published in English for the first time, as well as a selected chronology.
以下是本书中的几幅作品：（所有作品归属于Luigi Ghirri/Courtesy Aperture 基金会）
[nggallery id=13]